The Trail of Tears

through misty vapors to the top

of God’s mountain on the forgotten

from seven wolf ribs, and suckled

them at the breast of seven mothers.

He painted their faces in conquering

colours, and lashed each spirit

to the talons of an eagle.

Blue-Sky Cloudmen danced with wolves
to willow songs on the fork between two rivers.

We gripped the flowing robes of God, and ran
to feel his pleasure.

We stood tall like ‘Mother Corn,’ in harvest
fields filled with pumpkins and beans,
and ripened our cheeks with sloe plums.

Vultures bleached the skulls of our enemies.

Our children bathed in sweet streams.

But owls with greasy beaks came to spit darkness
into our council fires, and perch on the eyes of our
holy men.

The people choked on white clay dust, and drowned
in sand on the banks of big-bellied water.

We gazed into the spirit world from beyond a mask
of death.

They changed the mountains,
and made the rivers to run backward.
Spoke good words that did not last long,
and sat in pews to quarrel about god.

Why do bad men dwell in good houses?

Now, loose rocks have covered us. My spirit
flees into the smoke of my dead father dancing
in the next life. We rise together above the land—
over water.
His horses suit me.

“When I was young, I walked all over this country;
east and west. I saw no other people than the Apache.
After many summers, I walked again, and found another
race of people had come to take it—how is it?”

We wished only to speak sunlight into our hearts.
To follow mountain spirits toward ‘The Giver of Life.’
To own nothing, and everything—bow to no man.

Now, our mesquite and cactus are barren. We carry
life on our fingernails and wait to die.

A reminiscent sun laps the green
frosting first from sugar maple leaves,
then an early nip re-ices them in antique
butternut for the harvest celebration.
Eastern Cherokee bamboo flutes pipe

dove songs along the Oconaluftee,
beyond Newfound Gap. Once, I was
their guest and touched the music.
Hot flashes come further apart
now with each Indian Summer
daybreak. The change came mellow,

with acorn hulls to the strum
of a mountain dulcimer, and the throb-
jaw scent of roasting ear corn. Predawn
hoarfrost snaps a chalk line at the frown
wrinkle on old Clingman’s Dome,

just above the October tan line,
where God still numbers every leaf,
and each reward us for his faithfulness.
Soon, snow will powder the summit’s
mossy hairpiece, and telltale red fox
tracks at Bearmeat Corners.

This is time to pause for rites of passage.
To nestle in the interim. A time for lucid
thought & meditation. To mediate the carom
tipple, ponder leaf fossil, amber, flint—
determine which came first.

A time for brooks to sprint, backfill glory
holes, & sluice downstream as shekel
tributes to the God of downspout rhythms.
For fingerlings to stretch, temper, arch & hue
in reflective pools, then fledge as incandescent
lasers of prism light.

This is time to pause—
& witness rainbows learn to fly. 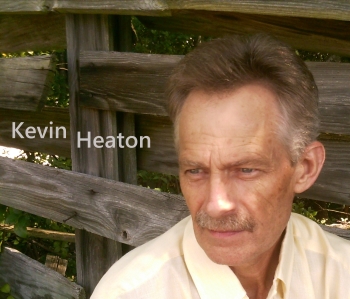 Kevin Heaton is originally from Kansas and Oklahoma, and now lives and writes in South Carolina. His work has appeared in a number of publications including: Guernica, Rattle, Raleigh Review, Beloit Poetry Journal, The Adroit Journal, and The Monarch Review. He is a Best of the Net, Best New Poets, and three-time Pushcart Prize nominee. His Poetry can also be found at his website.