Things
are
what they
are.
Coloring Jupiter green
won’t make it so.

Yesterday’s meaning
was for yesterday—
today the sun comes up
on another planet
entirely.

One night’s sleep
divides us
from an uncertain past.

The dead & the living
can’t mix often except
in poetry or dreams
where everyone’s illustrated
in a few fictive lines
purple cows here or there—as words
exculpate whatever they please.

Until they don’t and then
they damn the very thing
they’ve once raved about.

One minute now
until this day’s cares disappear.
Daylight hisses into dark,
and night barges into the frightened
corners of our mind—until at last,
the eternal stage manager lowers our curtain,
and consciousness skips,
among stars & rampaging raptors,
slipping right off the spinning earth. 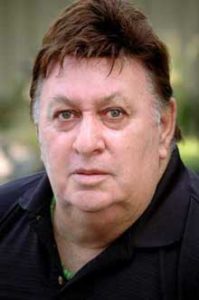 Steve DeFrance is a widely published poet, playwright and essayist both in America and in Great Britain. His work has appeared in literary publications in America, England, Canada, France, Ireland, Wales, Scotland, India, Australia, and New Zealand. He has been nominated for a Pushcart Prize in Poetry in both 2002 and 2003. Recent publications include The Wallace Stevens Journal, The Mid-American Poetry Review, Ambit, Atlantic, Clean Sheets, Poetrybay, Yellow Mama and The Sun. In England he won a Reader’s Award in Orbis Magazine for his poem “Hawks.” In the United States he won the Josh Samuels’ Annual Poetry Competition (2003) for his poem: “The Man Who Loved Mermaids.” His play THE KILLER had it’s world premier at the GARAGE THEATRE in Long Beach, California (Sept-October 2006). He has received the Distinguished Alumnus Award from Chapman University for his writing. Most recently his poem “Gregor’s Wings” has been nominated for The Best of The Net by Poetic Diversity. For further work by Steve DeFrance see www.Artvilla.com & Poetry Life & Times